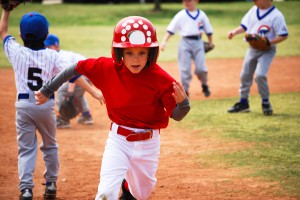 This morning, I received a voice mail from a vendor with whom we discussed business some months ago.  The message began with: “This is so and so and I am calling to touch base”.  Huh!  While I implicitly know what the vendor means to say, I am explicitly at a loss of understanding.

To get to the reason this phrase means nothing, let me explain its roots.  Touching base or “touching a base” is a baseball phrase.  It refers to the act of touching or maintaining contact with a base when you are stationed at that base following a hit, walk, etc.  But herein is where the meaningless act is defined.  It is NOT necessary to touch or maintain contact with the base at all.  It is essentially an act centered on insecurity.  What!

In baseball, runners are free to lead off or move away from a base at any time.  It is possible for the fielders to put the runner out if the ball is in play and the runner is not in contact or “touching base.”  However, there is actually no requirement that a runner return to the base and make contact between plays or pitches.

The most common example of this occurs when there is a runner on second base.  During the time in which the pitcher is getting ready to actually throw the ball and during the pitch, the runner usually leads off some 15 to 20 feet to obtain an advantage in moving to the next base.  If the ball is not put into play on that pitch, there is absolutely no reason for the runner to return to the base or in some way to touch the base unless a fielder forces the issue, which is relatively rare.  However, virtually every runner does return to touch the base as if they should or if it is important.  But it is not.

The runner normally goes back to the base because they are insecure about standing 20 feet out even though they are just as safe 20 feet out as they were 30 seconds prior.  Unless induced by a fielder attempting a pick off, returning to “touch base” is just an empty ritual that wastes valuable time and energy.  This ritual is so entrenched, however, that it seems positively odd to see a runner at second base stay in place 15 to 20 feet from the base between pitches without going back to the base.

Touching base in baseball is as meaningless as a vendor using the phrase to indicate something meaningful in a conversation and it is essentially an indication of insecurity.  The base runner is afraid of being picked off and the vendor is afraid to actually state the reason for calling.  In reality, the vendor is NOT calling to touch base, they are calling to “determine the status of a potential order discussed some months before.”  But the vendor does not say that because the vendor is insecure.  The purpose of the call is to confirm the potential for an order, but the vendor is so afraid of a “no” that they couch the conversation in such terms that it is the customer who has to figure out the purpose of the call.  This kind of conversation is a waste of both parties’ time.

In the movie Kate & Leopold, an insecure suitor indicates that he is placing a call to a woman, knowing the woman is not home, to “to put the ball in her court,” in other words to “touch base,” leaving the woman to determine the meaning of the call.  The wiser man chides the young suitor by letting him know that the very purpose of the suitor is to keep “the ball in his court.”

Insecurity does not win business nor does wasting the time of the person you contact.  Any conversational phrase that starts, “I am calling to…” starts well, but if that is followed by “touch base”, the call is useless.  State your purpose and move on to the business of your call.

Imagine a man proposes to a woman, and is asked for a few days to think about it.  After two days the man calls and says:

“I am calling to… touch base.”

Ah, now the insecurity becomes obvious, does it not?  That call is not going to convince the other person that this is a purposeful suitor any more than a vendor calling with the same “proposition.”

In regard to using this phrase: just stop it!